LUCY and Dexter from Wales 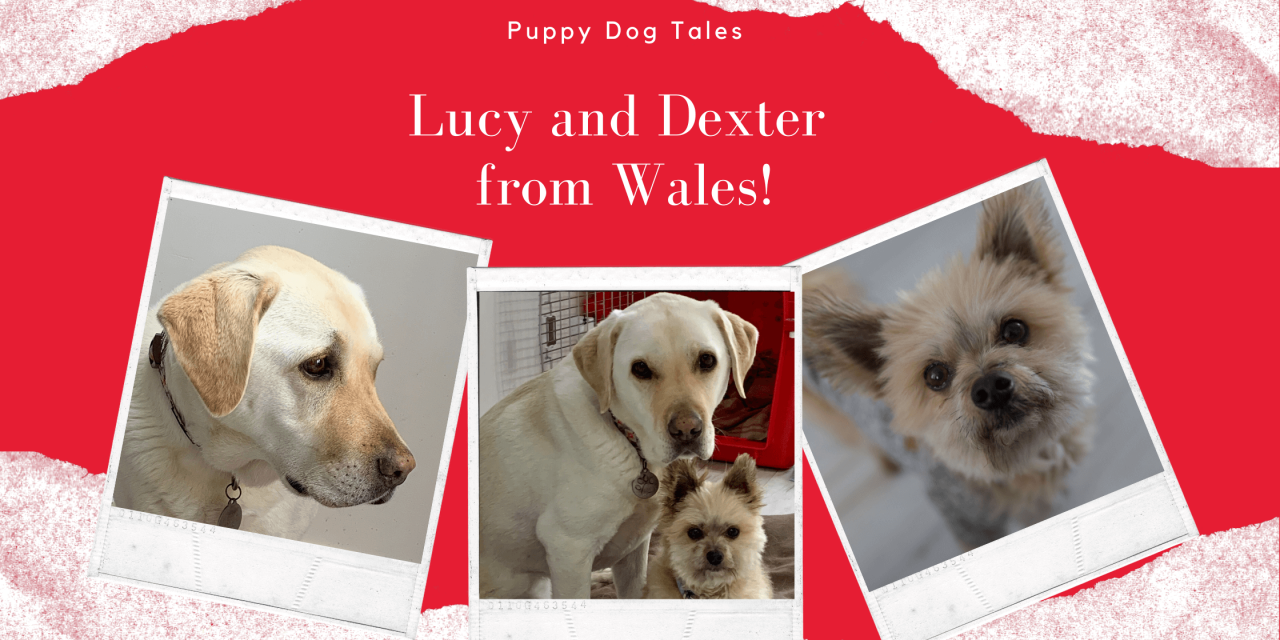 We will always look back on our first pet sitting assignment with fond memories. The two dogs we looked after for three weeks, Lucy and Dexter, were a pleasure to care for and were very well behaved.

As an added bonus it was our first time visiting Wales. In fact, it’s not often that you travel to the other side of the world to look after the pets of some fellow Aussies.

Lucy’s a beautiful Labrador Retriever with the typical sweet-natured personality that goes along with the breed.

Apart from having the typical Labrador’s never-ending appetite and the occasional theft of food, she was a breeze to look after. Nothing was too much trouble for Lucy and she would put up with anything, including Dexter!

Dexter’s an extremely cute looking little Cairn Terrier who, like lots of other small dogs, has a massive personality. Dexter also likes to do things on his own terms!

If you could convince Dexter that something was his idea then he would go along without a complaint but if he thought you were forcing him into something then watch out, the hackles would rise and the growling would start.

Bed time was a typical example of the differing personalities between the two dogs. Lucy would take herself off to her bed without a complaint whereas Dexter would only go when he was good and ready. You somehow had to manipulate him into thinking that he was better off being in bed.

Another good example was sitting on the floor and having a cuddle with Lucy and Dexter.

Lucy would lie there quietly for hours taking whatever affection you gave her and would be happy for you to come and go As you pleased. But with Dexter, cuddles were over when Dexter decided they were over and not before. If he thought you were ripping him off with cuddle time then you better look out!

Dexter and Lucy got along together famously but he would hen-peck her…..or should I say Terrier-peck her mercilessly!

Poor old Lucy had scratches on the bottom of her ear from where Dexter would bite her.

He wasn’t being mean when he bit her, he just wanted to have all of her attention.

Whenever you took the two of them to the beach or the park, Dexter would start barking liking crazy and jump up to bite at Lucy’s ears. The behavior wouldn’t stop until Lucy would start to chase him.

The two of them would have a wonderful time racing after each other, Dexter was so excited and just loved to be chased. Lucy would eventually tire and take a break………and guess what would happen?

Dexter would start barking again and start to jump up and bite her ears. And off they would run!

Lucy and Dexter had plenty of places to lie down and sleep, but Dexter had one place that he preferred over everywhere else.

You guessed it, on top of Lucy!

Whenever he had the opportunity, he would climb up on top of Lucy and have a nap.

Why lie on a rug when you have a lovely warm Labrador to sleep on!

The small dog with a big attitude

Taking Dexter for a walk was always entertaining!

Like many small male dogs that have big dog syndrome he would pee standing on his front legs. The purpose of this crazy and very bizarre looking behaviour was so that he could mark his territory higher up in the air.

I always found it highly entertaining.

Check out the videos below, you have to see it to  believe it!

We discovered very quickly that in Wales it is prone to rain for days on end without stopping. After living in Queensland all our life the constant rain was a bit of a culture shock.

My sneakers were constantly wet so we decided to take the dogs for a walk into town so I could buy some wellies. I had found the perfect pair of pet sitting wellies that were decorated with pictures of puppy dogs and I was desperate to try them on before they sold out.

Things were going perfectly until I left John with Lucy and Dexter on the footpath and walked into the shoe store.

I was just sitting down to take of my soggy sneakers when the next thing I know, Dexter was running madly round and round the store looking for me. The old lady next to me was looking angry and started talking loudly about how inappropriate it was for people to let their dogs run loose.

I picked up Dexter and made a quick exit out of the store. Poor John was standing there on the footpath with a shocked look on his face still holding onto a dog lead with a now-empty dog collar attached to the end of it.

Lucy of course, was perfectly behaved and sitting quietly next to him!

As for my wellies, well I decided that it would be best to go shopping another day, and bought the perfect pair for a pet sitter 🙂

Story by Susan Gan at Thrifty after 50

This website uses cookies to improve your experience while you navigate through the website. Out of these cookies, the cookies that are categorized as necessary are stored on your browser as they are essential for the working of basic functionalities of the website. We also use third-party cookies that help us analyze and understand how you use this website. These cookies will be stored in your browser only with your consent. You also have the option to opt-out of these cookies. But opting out of some of these cookies may have an effect on your browsing experience.
Necessary Always Enabled
Necessary cookies are absolutely essential for the website to function properly. This category only includes cookies that ensures basic functionalities and security features of the website. These cookies do not store any personal information.
Non-necessary
Any cookies that may not be particularly necessary for the website to function and is used specifically to collect user personal data via analytics, ads, other embedded contents are termed as non-necessary cookies. It is mandatory to procure user consent prior to running these cookies on your website.
SAVE & ACCEPT
You cannot copy content of this page
wpDiscuz
0
0
Would love your thoughts, please comment.x
()
x
| Reply