Stop the train, he’s stolen my bag: The pitfalls of train travel in Italy with luggage!

“Stop the train, he’s stolen my bag!” shouted John to the conductor as he jumped off the train, our train travel in Italy with luggage had suddenly gone very wrong.

We had heard that Italians were crazy drivers who placed a low priority on following the road rules. Considering that Italians drive on what Australians consider to be the ‘wrong’ side of the road, we felt that hiring a car and driving across Italy would be a challenge for us. We knew that parking was going to be a problem in several of the cities we were visiting so we opted for the supposedly stress free option of train travel in Italy for three weeks.

Even though we only had one suitcase and carry-on bag each, we quickly learnt that train travel in Italy with luggage can be very difficult. There is often nowhere to store your luggage on the trains and if there is, it will rarely be close to where you are sitting. You then have to lift your bags up and down multiple flights of stairs to get out the station…..…..and don’t even get me started on their seriously cute but incredibly frustrating cobblestone streets!

Our exciting train trip to Rome 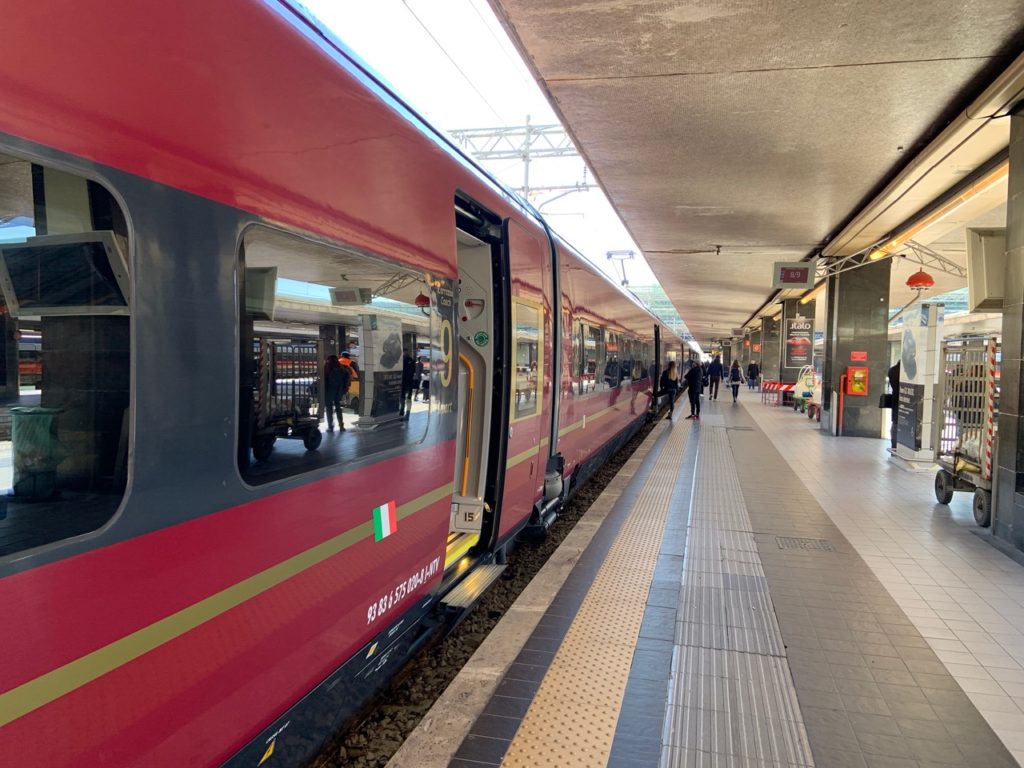 Our train journey that day started at La Spezia station, near the north-west coast of Italy. We had just spent a relaxing five days in Vernazza, Cinque Terre and were now moving on to Rome.

We entered the train to find that our allocated seats were not available and that someone else was sitting in them.

This always seems to be a problem when traveling on Italian trains. Some people have designated seats and others don’t so they just sit anywhere. You either have to evict them out your seat or you go and sit somewhere else and take the risk that someone will come along and evict you out of their seat…….…aaarghhh, train travel in Italy with luggage, or even without, is so frustrating!

Our designated seat wasn’t near any luggage storage so we decided to leave the guy in peace and sit somewhere else. The conductor directed us to the wheelchair seating at the end of the carriage; it had plenty of room for suitcases and had not been booked for the duration of our journey.

We organised our luggage, hung up our overcoats on the handy little hook and decided it was time to eat our picnic lunch.

Do you speak English?

John had just started looking in his backpack for hand wipes when the train started to pull into a station and one of the passengers approached us. “Do you speak English?” he said. He then showed us his train ticket and asked if this was the station he should get off at.

Have you ever been to the department store and people are giving out vouchers but instead of giving you the voucher they continue to hang on to it and use the piece of paper to pull you towards them? It happened to me once, many years ago. That’s what this guy was doing, he wouldn’t let go of the ticket but was forcing me to move slightly so I could read it. All the while this was happening my brain was trying to make sense of his behaviour but I couldn’t come up with a solution.

I also remember wondering why he had asked an English speaking person for help when the train ticket was in Italian and he clearly spoke with an Italian accent. At the time it didn’t make sense but it wasn’t long before I would find out why!

He then abruptly walked off saying he would ask the conductor. The entire experience had lasted no more than 20-30 seconds.

John turned back to continue looking for the hand wipes only to find that his backpack – along with his laptop, iPad and Bose headphones – had been swapped for a similar looking backpack.

Spot the difference between the two photos!

John reacted really quickly and took off down the train carriage, pausing only long enough to yell “Stop the train, he’s stolen my bag!” to the conductor before running down the platform.

I then experienced a moment of panic and thought what if the train leaves without him! I quickly followed him down the aisle with the intention of hanging out of the carriage door and refusing to move till he had returned. Luckily the conductor was standing just beside our door so I could explain what had happened and tell him to hold the train.

Oh no, where’s my handbag?

I was still dangling out the train door when I suddenly realised that I didn’t have my handbag with me. It was the type of bag that hangs diagonally across your chest and I had removed it to take off my jacket and had left it on my seat. My immediate thought was what if the guy was working in a gang and they were watching to see if we had left the rest of our possessions unsupervised?

I went running back up the aisle like a crazy woman with my heart pounding in my chest. The sense of relief I felt was indescribable when I saw my handbag with our passports, cash and my mobile phone containing details of our travel arrangements still sitting on the chair where I had left it. To lose John’s laptop and iPad was one thing but to lose all our travel documents and money would be a nightmare.

The train is leaving without him!

The train gave a slight jolt and started to move out of the station. Where was John? Was the train leaving without him?

It was such a relief to see him walking down the aisle with his backpack over his shoulder.

He told me that as he had ran down the platform he could just see his backpack on the shoulder of the thief as he was just about to leave the station. The only reason that he could tell his black backpack was his bag from the crowds of people also wearing black backpacks, was that the little blue packet of hand wipes was still hanging of the partially unzipped compartment!

He ran up to him, yelled “That’s my bag!” and ripped it off his shoulder. Our thief, didn’t even look back but just kept walking.

The pitfalls of train travel in Italy with luggage

We were both shaking with the stress of having such a close call and sat there clutching our belongings.

The train conductor came and checked we were OK. He said that it had happened last week to another couple but they didn’t notice the bag swap till hours later when they had reached their destination.

John was so angry and wanted to call the police but the conductor said there was no point. We would have had to get off the train and spend several hours with the police making a report before having to pay for another train ticket to continue our journey. He said in reality that even if the police caught him, the thief would be back on the streets again the next day doing it to someone else.

All you can do is stay alert, invest in anti-theft travel bags that can’t be slashed or cut and then connect them all together with an anti-theft strap.

I loved traveling by train in Italy but as with everywhere else in that country, you just need to stay alert.

Pin it for later!

Stop the train, he’s stolen my bag: The pitfalls of train travel in Italy with luggage!

Have you had a similar experience? Share your train travel in Italy with luggage adventures in the comments below.